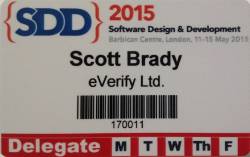 For the past week I've been a country bumpkin in the big smoke for SDDConf 2015. The trip has had it's ups and downs (I got mugged, yay!) but overall the conference was a success. I got to see some excellent speakers, including some I didn't know of before hand, and gain some immeasurable knowledge.

I also finally met Dominick Baier and Brock Allen, the creators of Identity Server, and was vaguely recognised, so I guess there was some worth in plastering my ugly mug all over this site.

So out of the back of this you can expect a flurry of blog posts coming up so that I can record and expand on some of the subjects that were covered.

So expect these posts over the next couple of months and apologies if I was socially awkward around anyone. I promise I'll be a bit more chipper next time (see above excuse).

Special thanks and a quick promotion for the following speakers:

Now to write up my notes for the colleagues back home!